“I was afraid I would be a freak with maybe three-quarters of a face. Here I am, eleven years later, a survivor.” 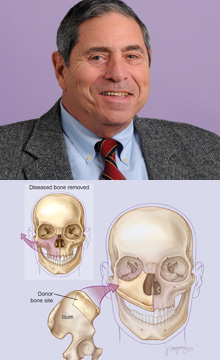 J. Jay Mautner felt pressure in his teeth as though food had lodged there. He also had discharge from his nose, and his right eye would tear constantly. His primary care physician referred him to an ear, nose and throat specialist who discovered a mass in his maxillary sinus. A biopsy confirmed that it was an osteogenic sarcoma–a bone cancer most common in children and very rare in this portion of the body. There was only one doctor who the ENT specialist felt could help J. Jay–Mark Urken, MD, a surgeon at the Institute for Head and Neck and Thyroid Cancer.

J. Jay learned he had two options for treatment. One involved leaving a hole between the mouth and nasal cavity and inserting a prosthesis. The other was total restoration–a microvascular surgery during which the tumor would be removed and the face would be reconstructed using a procedure pioneered by Dr. Urken and his team. The procedure would take longer and be much more complex. J. Jay chose the latter. He wanted not just to live, but to live as normally as possible.

During surgery in July of 1998, J. Jay’s tumor was removed and, using bone harvested from his iliac crest and muscle from his abdominal wall, his face was restored. Today, J.Jay Mautner is alive and well, free of cancer and living his life in Manhattan.