“It wasn’t until I was in surgery that it was discovered my thyroid cancer had invaded my trachea and larynx. Dr. Urken and his team actually had to remove a ring of my trachea during the surgery—something they never anticipated doing at the outset.” 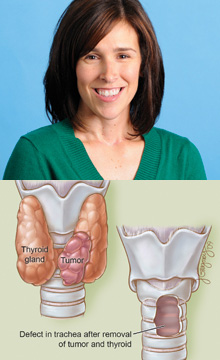 When Danielle Hamarich went to her primary care doctor for an annual exam, he discovered a lump on her neck. After she saw an endocrinologist, a biopsy was performed and Danielle learned that in all likelihood, she had thyroid cancer. She was referred to the Institute for Head and Neck and Thyroid Cancer and on June 6, 2009, Mark Urken, MD, confirmed the diagnosis. Because Dr. Urken recommended that the lymph nodes on the other side of her neck be biopsied as well, the cancer was caught there in its early stages that would have otherwise gone undetected. One month later, Danielle had surgery to remove the cancer.

Once surgery had begun, Dr. Urken and his team discovered that the cancer had invaded Danielle’s larynx and trachea, which required a more intricate removal of the tracheal wall and the front portion of her voice box. A delicate reconstruction was performed, avoiding damage to nerves that would affect her voice.

Following surgery Danielle had physical therapy and follow-up testing. Danielle’s cancer ordeal was not over. Cancer was discovered in her lungs, for which she received radioactive iodine treatments. Danielle believes that because of the thoroughness of the care she received from Dr. Urken and his team, she is here today, able to speak normally and enjoy her life.